Teeth & Tongue are incredibly excited to share their latest single ‘Turn, Turn, Turn’ premiered via The FADER. The track comes the forthcoming album Give Up On Your Health out Friday 2 September through Dot Dash / Remote Control – with USA distribution by Captured Tracks.

To celebrate the release of Give Up On Your Health, Teeth & Tongue will be touring the album across Brisbane, Sydney, Melbourne and Hobart.

Jess Cornelius had the following to share with The FADER on how ‘Turn, Turn, Turn’ came about:

“You’d probably never pick it now, but the first half of ‘Turn, Turn, Turn was actually written on an acoustic guitar. I wrote it while I was staying in very temporary digs in West Brunswick, subletting a couple’s bedroom while they spent a month in Europe. I was writing most of my songs on acoustic guitar at that time because I was moving around all the time and I didn’t have a studio, so that’s all I really had to write on.

I took the song to the band one rehearsal, not really expecting it to go anywhere, and it was really just the first two verses. For laughs I started playing the note sequence on a trance-like arpeggiator keyboard, and moved the vocal phrasing around a little bit to fit. James and Damian started playing around with this great drum/bass combination with a clave and before we knew it we had this totally unexpected, slightly doof  number. It took a while to get the rest of the song together structurally, but Marc had come up with this guitar riff and that sort of informed some of the other parts. For a while, when we played the song live, we would segue into the Beach Boy’s ‘Kokomo’ halfway through, but unfortunately that version never made it onto the record.”

Give Up On Your Health is available for pre-order digitally, and on limited edition 12″ vinyl via bandcamp and Artist First. 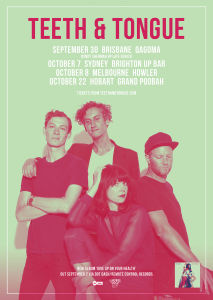